Snow on the Roof Can Be Troublesome

A snow-covered landscape can be a picturesque sight. However, a roof covered in snow is something no homeowner can afford to marvel at. That’s because accumulating snow and ice very well could push a roof to its breaking point, even if the roof was sound before the winter arrived. 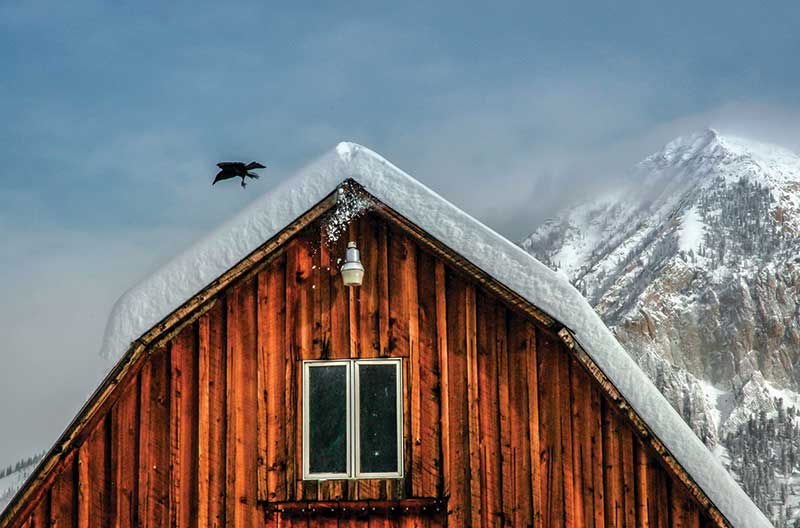 According to The University of Arkansas division of Agricultural Cooperative Extension Service, the water content of snow can range from 3 percent for very dry snow to 33 percent for wet, heavy snow. A roof may only be able to support 12 inches of wet, heavy snow before it is pushed to its breaking point. Snow can be quite heavy, weighing around 60 pounds per cubic foot. When heavy snow arrives, homeowners should do their best to safely clear their roofs of snow.

The threat of snow causing a roof to collapse has many homeowners floundering. While having snow build up on the top of a house is dangerous, so, too is climbing up on a slippery roof to push off the snow. As winter approaches, many emergency officials urge people to clear their roofs and decks to minimize structural collapse. But how does one do it safely?

Steep-pitched roofs tend to be the easiest to deal with snow and ice problems because a snow rake is usually effective. A snow rake is just what it sounds like. It is a metal device on a telescoping pole that can be extended to drag the snow off of the roof.

Homeowners may need to use extension ladders to reach taller parts of the roof. A second person can remain below to steady the ladder and ensure it doesn’t tip over on a slick surface.

It is not adviseable to climb up on the roof directly and shovel the snow off. The added weight of a person may be all that’s needed to cause a roof to collapse, potentially resulting in grave injury and considerable roof damage. A snow-covered roof also can be slippery, which could result in a person falling off the roof. Anyone who does not feel secure removing snow from the roof can hire a professional service to do so. Just be sure the service is properly licensed and insured.

In addition to removing the snow from the roof, here are some winter weather home care tips.

• Clean the gutters to remove any debris so that gutters will not become blocked and form ice dams on the roof. In addition, keep gutters and drains free of ice and snow.

• Add insulation to attic floors to prevent heat from the home escaping to the roof and causing ice dams that freeze when snow melts. In addition, make sure the attic is well ventilated so that the temperature inside will remain consistent with outdoors, further preventing snow melt.

• Melted roof snow can leak into homes or pool around foundations, causing rot and other problems. Keep an eye open for any leaks.

• If you live in an area prone to heavy snowfall, a metal roof may be a good investment. The slippery roof causes snow and ice to slide off. Special features at the end of a metal roof break up the snow before it reaches the ground, preventing large, heavy piles of snow from causing injury when falling to the ground.

Call for a FREE QUOTE